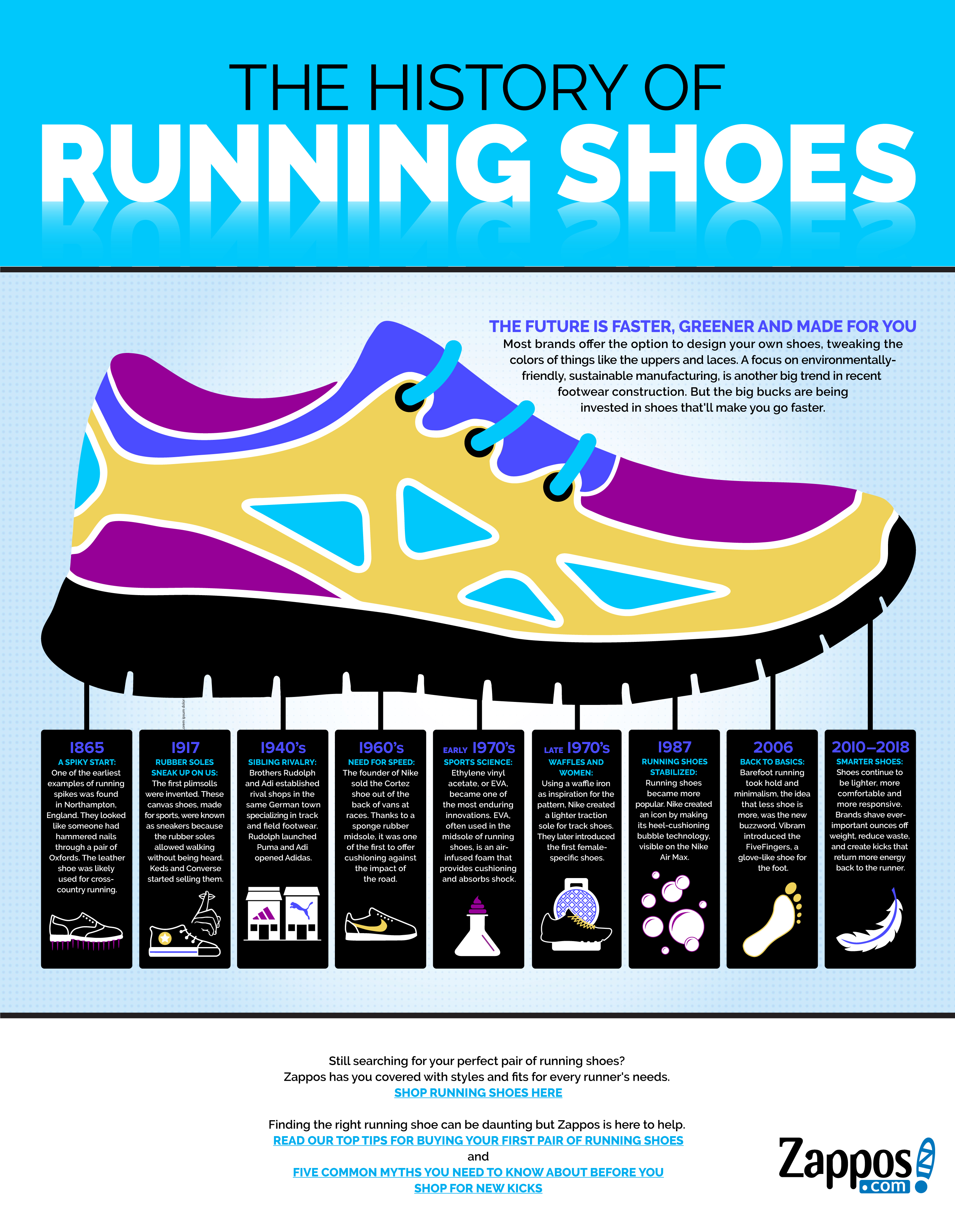 Just over fifty years ago when Britain's Roger Bannister ran the first ever sub-4-minute mile, he did it in a pair of running spikes that looked like someone had hammered nails through a pair of Oxfords.

Today, running shoe technology has become big business as brands search for new ways to give runners a comfy ride and an all-important edge.

Once-revolutionary innovations such as Nike Air, originally designed for elite athletes, are now the retro sneaker of choice for the fashion crowd. Stability shoes and five-fingered foot gloves—all hailed as the next big thing—have piqued and tapered off. It's not always easy to predict where technology will take us next.

While we await the next groundbreaking tech that will propel elite athletes and plucky amateurs over the finish line in record-smashing times, let's take a look at the shoes and innovations that have shaped the way we run.

One of the earliest examples of a running shoe dates back to 1865. Found in a museum in Northampton, England—a town renowned for its shoemaking at the time—it's thought to have belonged to a Lord Spencer and looks very much like a man's dress shoe, only with spikes on the bottom. Lightweight, made of leather, and featuring a band for added lateral support, the shoe was likely used for cross country running.

Another early running shoemaker was an English company called J. W. Foster and Sons, now better known as Reebok. Founded in 1890 by Joseph William Foster, a keen runner who wanted to design shoes that could help him go faster, the company made leather spikes worn by British athletes, including the 1924 Olympic 100-meter champion Harold Abrahams — the inspiration for the film "Chariots of Fire."

In the mid-1800s, a new process called vulcanization was developed. Employing heat to fuse rubber and cloth together, it led to the invention of the first plimsolls, light rubber-soled canvas shoes worn especially for sports. Known as sneakers because the rubber sole allowed the wearer to walk around without being heard, they became popular with athletes after World War I when companies such as Keds and Converse started selling them as sports shoes.

In the 1920s, brothers Adi and Rudolf Dassler started a sports shoe business in the small German town of Herzogenaurach that specialized in track and field footwear. Politics, the war and their wives not getting on caused a rift between the two siblings. In the 1940s they set up rival shops in the same town on either side of the river. Rudolf launched Puma in 1948. Adi opened Adidas, of course. (Fun fact: Both companies are still based in Herzogenaurach.)

In the 1950s Bill Bowerman, head track coach at the University of Oregon, wanted to invent lighter, faster running shoes for his athletes. Most were wearing leather spikes, similar to those Roger Bannister wore when he broke the four-minute mile in 1954. Although Bowerman took his designs to several manufacturers, no one would invest. As Julia Roberts would say, "big mistake."

In the 1960s, as longer distance running become more popular, Bowerman and one of his former student athletes, Phil Knight, started a company called Blue Ribbon Sports. They bought shoes based on Bowerman's designs from Japanese running shoe companies and sold them out of the back of vans at races. Their most popular shoe was the Cortez. Thanks to a sponge rubber midsole, it was one of the first to offer cushioning against the impact of the road. When Bowerman and Knight formed their own manufacturing company in May 1971, the Cortez became their flagship shoe. That company was called Nike.

The 1970s saw the appliance of sports science to running shoes. Podiatrists, now involved with research and design, identified different running gaits as well as suitable shoes for each type. One of the most enduring innovations in shoe technology appeared. Ethylene vinyl acetate, or EVA, still used in most shoes today, is an air-infused foam that provides cushioning and absorbs shock. Brooks, the first to use EVA, incorporated it in the Villanova shoes in 1975.

In the same decade, Nike's Bowerman developed a new kind of lighter traction sole for track shoes. Playing around with rubber and a waffle iron in his kitchen, he created the waffle sole, still a feature in some Nike shoes (although the waffle iron has been retired). It wasn't Nike's only innovation. In 1978, they introduced the first female-specific shoes, designed on smaller lasts.

In the late 70s and early 80s, running was booming. Between 1971 and 1981 there was an 1,800 percent increase in marathon finishers, and like shoulder pads and mobile phones, running shoes became more popular. Brooks launched the first shoe to try and control pronation (the rotation of the foot) in 1976. With pronation thought to cause injuries, the Brooks Vantage had a wedge inside to help the runner's foot slant slightly outwards.

In the 1980s, shoes built for stability, with the combination of good support and ample cushioning, were all the rage. These included the Brooks Chariot (now known as the Beast) and the X-Caliber GT, which later became the Asics Kayano.

In 1987, Nike created an icon by making its heel-cushioning bubble technology, first used in 1979, visible on the Nike Air Max. Throughout the 1990s and early 2000s, if your sneakers didn't resemble the bubble on a level, you might as well just go home.

A new millennium. A fresh start. New thinking, including an article in the journal Nature by Harvard Professor Daniel E. Lieberman, suggested that barefoot running can be comfortable, for some people, even on the hardest surfaces. The running world became preoccupied with this idea.

After noticing Stanford athletes training barefoot, in 2001 Nike started working on the Nike Free, a shoe designed to recreate the barefoot running feel by reducing shoe weight and employing a sole that made runners feel more connected to the ground. In 2006, Vibram's FiveFingers – glove-like minimal shoes with individual compartments for each toe and extremely thin rubber soles – came out, and minimalism, the idea that less shoe is more, was the new buzzword. This barefoot principle, that shoes should work with the foot's movement rather than against it, was cemented when Christopher McDougall published the book "Born to Run," following his time living with the Tarahumara, a Native Mexican tribe of prolific ultra runners who wore only thin sandals to achieve extraordinary feats of endurance such as covering hundreds of miles on one run.

Barefoot running may not have been the complete answer to injury prevention, but the movement left a footprint. In more recent years, shoes have continued to get lighter, more comfortable and more personalized.

In 2012, Nike introduced Flyknit. Ten years in the making, Flyknit is a lightweight yarn fabric that can be micro-engineered to provide extra support where needed, allowing uppers to be cut from one piece of fabric. It shaves ever-important ounces off weight and reduces waste by around 60 percent compared to a traditional cut and sew shoe.

In 2013, Adidas introduced their Boost technology, a cushioning system designed with leading chemical company BASF. The idea was to create something "better than EVA." The thermoplastic polyurethane midsole, made of thousands of energy-returning capsules, arguably does the trick. It compresses under pressure to absorb shock and bounces back instantly to provide energy return with every stride.

The future is faster, greener and made for you

Runner's World magazine predicts the future of running shoes is bespoke. Most brands offer the option to design your own shoes, tweaking the colors of things like the uppers and laces. In France, Salomon's ME:sh shoe design system takes this a step further, letting runners tailor shoes for fit, running style and terrain.

Another big trend changing footwear construction is a focus on environmentally-friendly, sustainable manufacturing. Eco-friendly shoes, such as Adidas' Parley, which is made from plastic found on beaches and in coastal communities that would otherwise end up in the ocean, are heading in this direction. Shoes are getting smarter, too: The Altra Torin IQ has sensors that can provide data on every footfall.

But the big bucks are being invested in shoes that'll make you go faster. The race to design the pair that breaks the two-hour marathon barrier is firmly on. Earlier this year, Nike's documentary "Breaking2" chronicled the brand's attempt to go sub-two with some of the world's top athletes running in the Nike Zoom Vaporfly Elite. Designed specifically for the two-hour goal, the Vaporfly features a carbon-fiber plate in the midsole designed to provide greater energy return and help propel athletes forward.

Despite all efforts, however, the barrier remains unbroken. We can't help thinking this is good news for us mere mortals as, until the record falls, running shoe innovation is going to be top of every brand's list.

Read more of our favorite articles!