You'd have to be a bit of a masochist to tackle the Oze Iwakura Vertical Kilometer , a roller coaster race around a Japanese ski resort featuring 3,280 feet of climbing in about 3 miles. At least it would seem that way, as world champion trail runner Joe Gray tells it.

“There was one beastly section called the 'Giant Wall' that was steeper than a double black diamond ski run, and mud from on-and-off rain made traction an issue. When I tried to run, I slid back down like I was on skis," he says. “I did enjoy the moment, however, when I looked back and saw the long line of runners suffering and crawling just like me, with a beautiful view of the surrounding peaks behind them."

Welcome to the heart-thumping, thigh-burning, quad-shaking world of hill climb racing. Adventurous runners lace up to push their limits on thousands of feet of grueling uphill, hopefully earning spectacular vistas—and serious bragging rights—along the way. Any mountain race will include some hefty vertical, of course. But, hill climbs like New Hampshire's Mount Washington Road Race, Oregon's Mt. Ashland Hill Climb, and Colorado's Pikes Peak Ascent (with elevation gains of 4650', 5600', and 7815', respectively) push it into the red zone with their punishing inclines.

According to trail runner, author, and American Trail Running Association founder, Nancy Hobbs, training for this type of intense race is a challenging balancing act.

“You have to be mentally tough, and I think in order to do well, you really need to do some specific training in this kind of endeavor," she says.

“Tenacity is a big one," he says. “And honestly, a little bit of a want to suffer, because you're going to suffer running uphill that long. You kind of have to make friends with pain."

Here are four runners, including Chick, who know that friendship well—and who know exactly what it takes to come out, quite literally, on top.

While he began his running career in the "flats" of South Dakota, Chick now enjoys notching big miles in the mountains. He calls his Mt. Ashland Hillclimb Run “an exercise in suffering" that spans a half-marathon in distance with an equally gnarly mile-plus of continuous vertical to the 7533' summit of Mount Ashland. Chick loves the challenge and reward of hill climbs, but is also stoked to support other racers giving it their best.

“All I see at the finish are smiles, and a look of pride and accomplishment on runners' faces," he says. “They've just realized that they can push themselves far beyond what they thought was possible."

Most recent race: Run Rabbit Run, an almost 103-mile ultramarathon in Steamboat Springs, Colorado featuring over 20,000' in gain at an average incline of 8 percent. The race's high point tops out at 10,557' near Buffalo Pass on the Continental Divide.

Favorite accomplishment: While Chick enjoys the relative solitude of the Mt. Ashland Hillclimb Run's location deep in the forest, he also looks forward to the reward earned after climbing through all of those trees. "You get to the top and you're on this high point in our valley. You can kind of see everything and it's beautiful," he says. "And then we throw a pretty wicked party."

What motivates him: "I try to find something different before every race to keep me moving. This recent one was the first race I did after my first child was born, and I didn't want to come home with anything but a finish for her. I did another one about three or four weeks after my mother passed, so for me, it was kind of honoring her memory."

Next challenge: When we spoke, Chick was still recovering from the rigors of the 2017 Run Rabbit Run. While he's still working out his 2018 calendar, he's angling to log some big miles, hoping to tackle one or two 100-mile races. Of course, Chick also has the next Mt. Ashland Hillclimb Run to organize, which should keep him plenty busy in the interim.

Pro tip: "Anybody can do it, honestly, you just have to be willing to put in the work. Even if you live in the flats of Nebraska or South Dakota where I'm from, you can find ways to do interval-type training that'll get you ready for hill races. You have to be willing to be uncomfortable for a long period of time, but the rewards are always worth it."

With a laundry list of wins, including his third XTERRA Trail Run World Championship in December 2017, it's no understatement to suggest that Joe Gray is one of hill climb racing's top competitors. He discovered the sport just after college and latched on immediately, inspired by the sense of adventure and the spirit of competition.

"There's a purity to pushing yourself to your limit that's very appealing," he says. "It's all about fitness, determination and grit."

Favorite accomplishment: "Doing well at an international level for a long period of time--that's kind of been the biggest highlight , just consistency in being competitive."

What motivates him: "I think the people who doubted me in my life, and people who doubt me even today. Those people are beneficial just because I can draw from that energy, and negative energy can create positive energy in my athletics."

Next challenge: Gray jokes that his next challenge is tackling a visit to Disneyland, but he's hoping to kick off his 2018 race schedule logging some vertical in Europe.

Pro tip: "People see this crazy thing on social media and they're like, 'I'm a couch potato, [but] I saw this guy running this crazy mountain ridge and I'm going to do it tomorrow,' and that's the wrong thing to do. Find something that you feel you can handle comfortably and work your way up; don't try to be like other people--that's how you get into trouble."

Some of adventure writer Morgan Tilton's brightest childhood memories include backcountry explorations with her dad, which left her with a deep love of the alpine. Those experiences also fostered an affinity for an array of mountain sports, although she focuses on the altitude-filled trinity of skiing, snowboarding, and trail running. The latter, especially on steeps, offers a satisfying paradox.

“While it is really challenging, it's a reprieve because you're so focused on what you are doing in that moment that you're not facing the other challenges in your life," she says, likening the hill climb experience to being in a “meditative" state. “There's just something that is really amazing about realizing the capacity of your mind and the human body."

Longest climb: Imogene Pass Run, a 17.1-mile race across Colorado's San Juan Mountains featuring 5,420' of continuous gain, topping out at its namesake pass at a lung-busting 13,114'.

Most recent race: Leadville Trail 100 Run, a 100-mile ultramarathon in Colorado's Rocky Mountains featuring approximately 15,000' of gain across six major climbs. As if that doesn't sound daunting enough, runners undertake dual ascents of its 12,600' high point at Hope Pass due to an out-and-back course.

Favorite accomplishment: Tilton calls the Leadville Trail Marathon, a qualifier for the Leadville Trail 100 Run that features 6,333' of gain and a 13,185' high point at Mosquito Pass, one of her favorite accomplishments. "I felt really good while I was running, which, for me, is the ultimate goal," she says. "I finished top ten in that race." That showing inspired Tilton to adopt a competitive mindset and pursue hill climb racing more seriously.

What motivates her: "I remind myself that all of the discomfort will pass: Being uncomfortable is an ebb and flow like any challenge in life," she says. "I also remind myself that I'm mentally tough and physically strong enough to grit through those moments: I recall specific examples of the tough times – physically, emotionally, mentally – that I've faced and summited."

Next challenge: Tilton is interested in the Altra US Skyrunner Series, a collection of fifteen grueling uphill races spread across the western states and New York. These range from the relatively short 12-mile Kendall Mountain Run in Silverton, Colorado, with 3,750' of gain at an average 12 percent incline, to the lengthy IMTUF 100 (Idaho Mountain Trail Ultra Festival), which features over 20,000' of gain in just over 100 miles through Idaho's Salmon River Mountains. 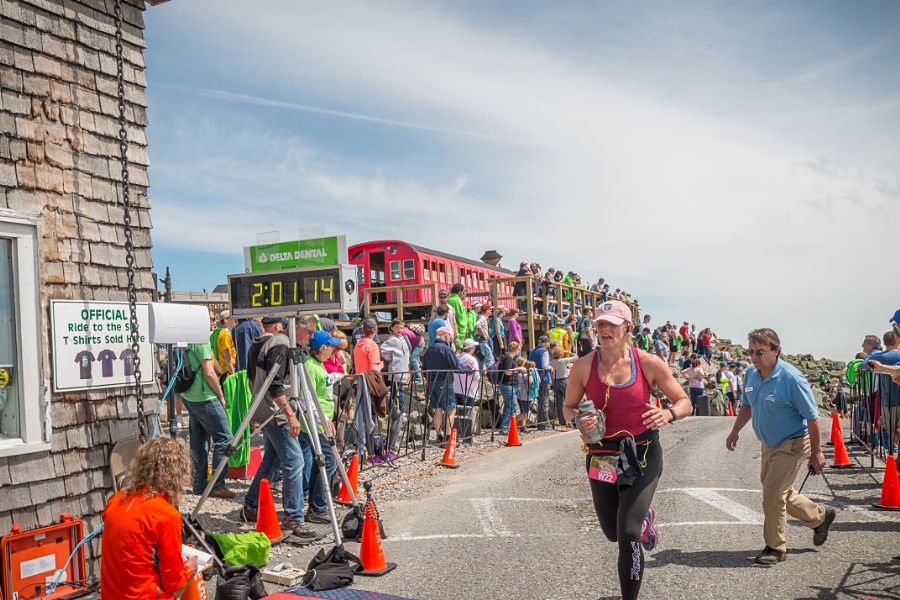 Unlike the other runners, attorney Vanessa Adriance is an accidental hill climb racer. The New Hampshire native grew up in the legendary shadow of Mount Washington, and when a cousin suggested they enter the lottery to race to its summit, she agreed, figuring they wouldn't snag a spot. When they did, she committed to the cause—and ended up loving it.

Although Adriance spends far more time sparring as a competitive boxer, she plans to head up Mount Washington again next year, especially since she discovered a secret weapon from her time in the ring.

Longest climb: Mount Washington Road Race, which features an average incline of 12 percent along most of its 7.6 miles until it steepens to climb a staggering 22 percent in the final push to the 6,288' summit.

Favorite accomplishment: While she found confidence in the boxing ring, Adriance wasn't sure she'd feel the same about racing up Mount Washington, something she thought only "crazy" people did. But her inaugural experience shattered that misconception. "To find myself crossing the finish line of something that I thought was impossible was a really incredible feeling," she says.

What motivates her: "I'm tremendously competitive, so the idea of giving up or letting someone get the better of me drives me insane. Also, I've been through enough awful races, awful fights, and awful days of sparring that I look back at those things and I think, 'If I got through that, I can get through this.'"

Next challenge: Adriance plans to tackle a Spartan Sprint, a roughly 3-mile race that's short on distance, but long on difficulty, featuring more than 20 obstacles that runners must navigate throughout the course. But future hill climb races are also on the horizon. Adriance plans on tossing her name in the Mount Washington lottery again, and even has her eye on Southern California's Mt. Baldy Run to the Top, a 7-mile, 4,064' climb to the 10,064' summit of its namesake peak.