It's 7 p.m. on a Thursday evening in Philadelphia's thriving Fishtown neighborhood and the Frankford Avenue thoroughfare is buzzing with diners and drinkers. But that's not where the real action is. A crowd is gathered in the nearby community greenspace of Palmer Park. Having tightened their shoelaces and made their introductions, the 70 or so tee-clad runners take off down Frankford, running 4 miles to a local pub—all in the interest of science.

These are the Fishtown Beer Runners. 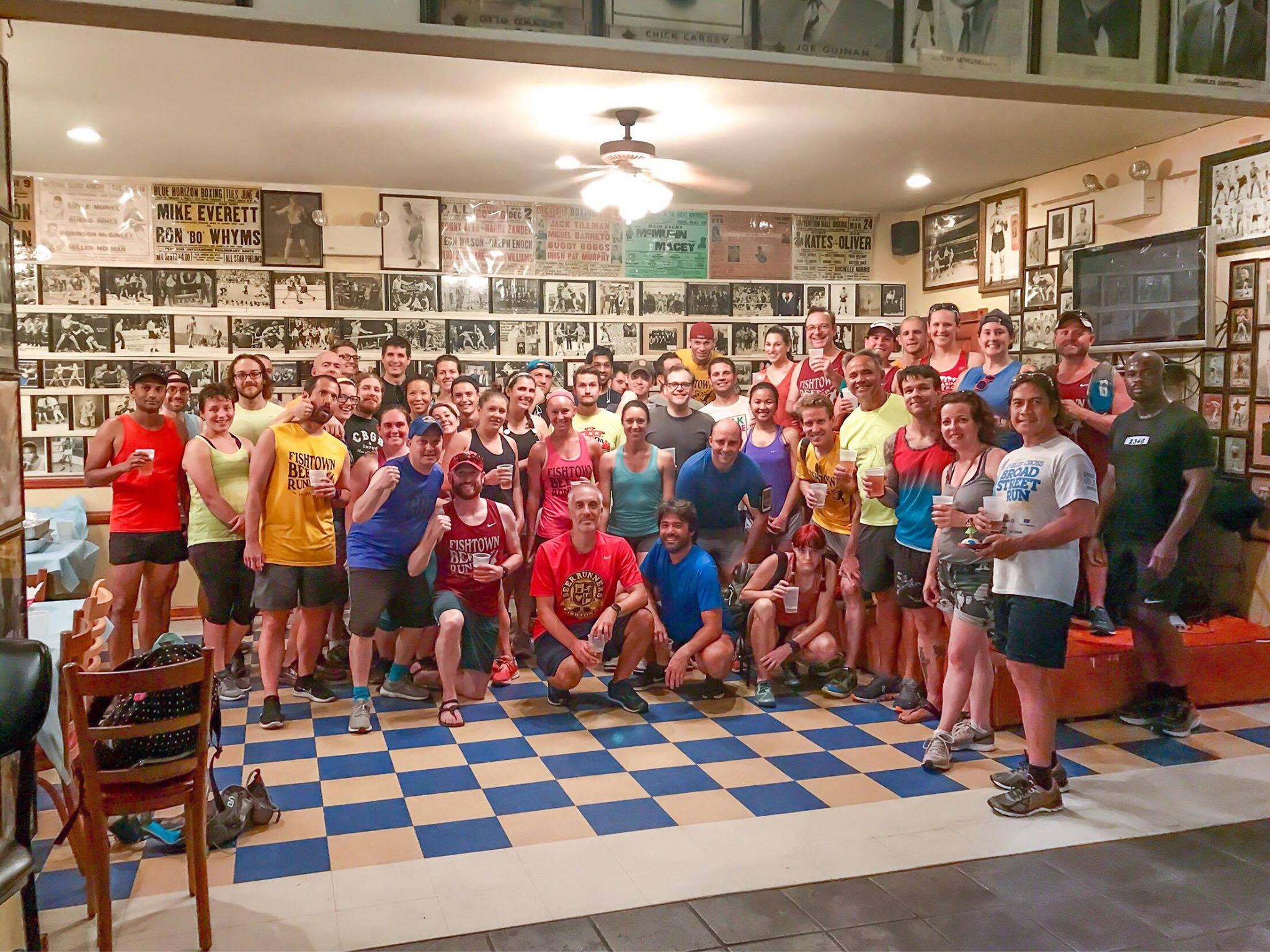 Hailed as “America's coolest running club" by "Born to Run" author, Chris McDougal, in the 10 years since its founding, Fishtown Beer Runners (FBR) has grown from two friends running to a Philadelphia bar to the city's largest running club—with up to 100 people showing up to run each week. It has spawned chapters around the world, 10 weddings, at least five Beer Runner babies, the first-ever Beer Runner Summit, and its own documentary, "Beer Runners."

Founded to test a study that showed responsible beer consumption after running doesn't harm—and may even help—recovery, Fishtown Beer Runners enjoy a brew together at a different bar after each weekly run.

Friendships built here extend beyond the club with members supporting one another through personal struggles and bettering their communities with fundraising and charity work.

The journey began in 2007 when then 42-year-old, David April walked out his front door, and ran down the block. Reeling from his divorce, April had hit rock bottom. Though he wasn't a runner, by the time he reached the corner, he felt a little better. April kept it up; the runs becoming his medicine in a quest to heal. As his distance increased, so did his drive. 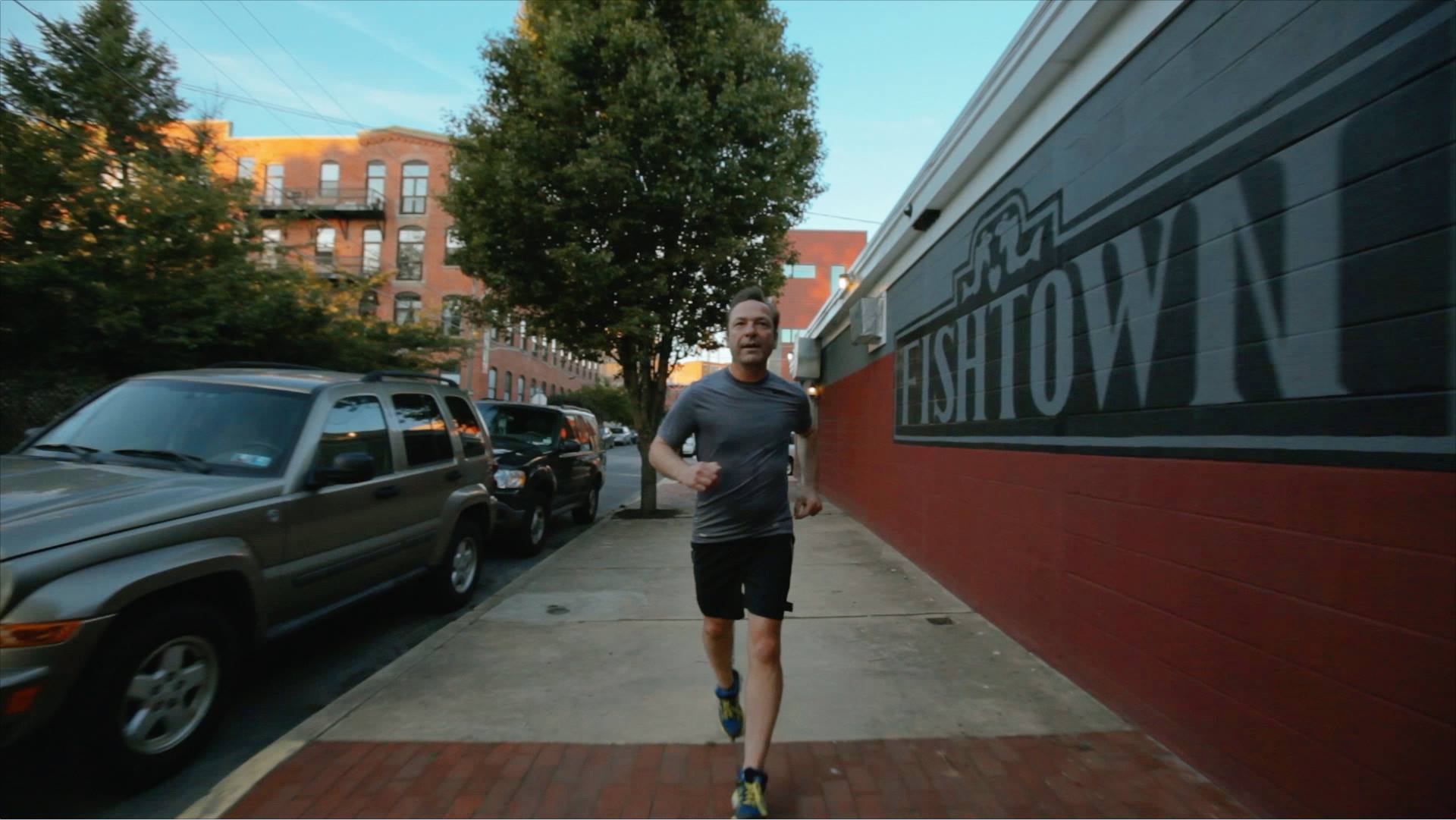 More determined than ever, April called up friend Eric Fiedler and asked if he'd train him. They began running together, and one night, Fiedler brought up a study originally released in 2007 by Manuel Castillo, a professor at the University of Granada, in Spain, that compared the recovery effect of drinking a beer after exercise to drinking water. The study concluded that, "after exercise and subsequent water losses, a moderate beer intake (660ml) has no deleterious effects on markers of hydration in active individuals."

Intrigued, April and Fiedler put the beer study to the test, stopping at a bar for a brew on their run route. After several such 'experiments' April thought, we should be sharing this. And, with Fiedler's help, Fishtown Beer Runners was born.

Intimidated by the seriousness of other running clubs, April wanted Fishtown Beer Runners to be a group where runners of all abilities were welcomed and celebrated. 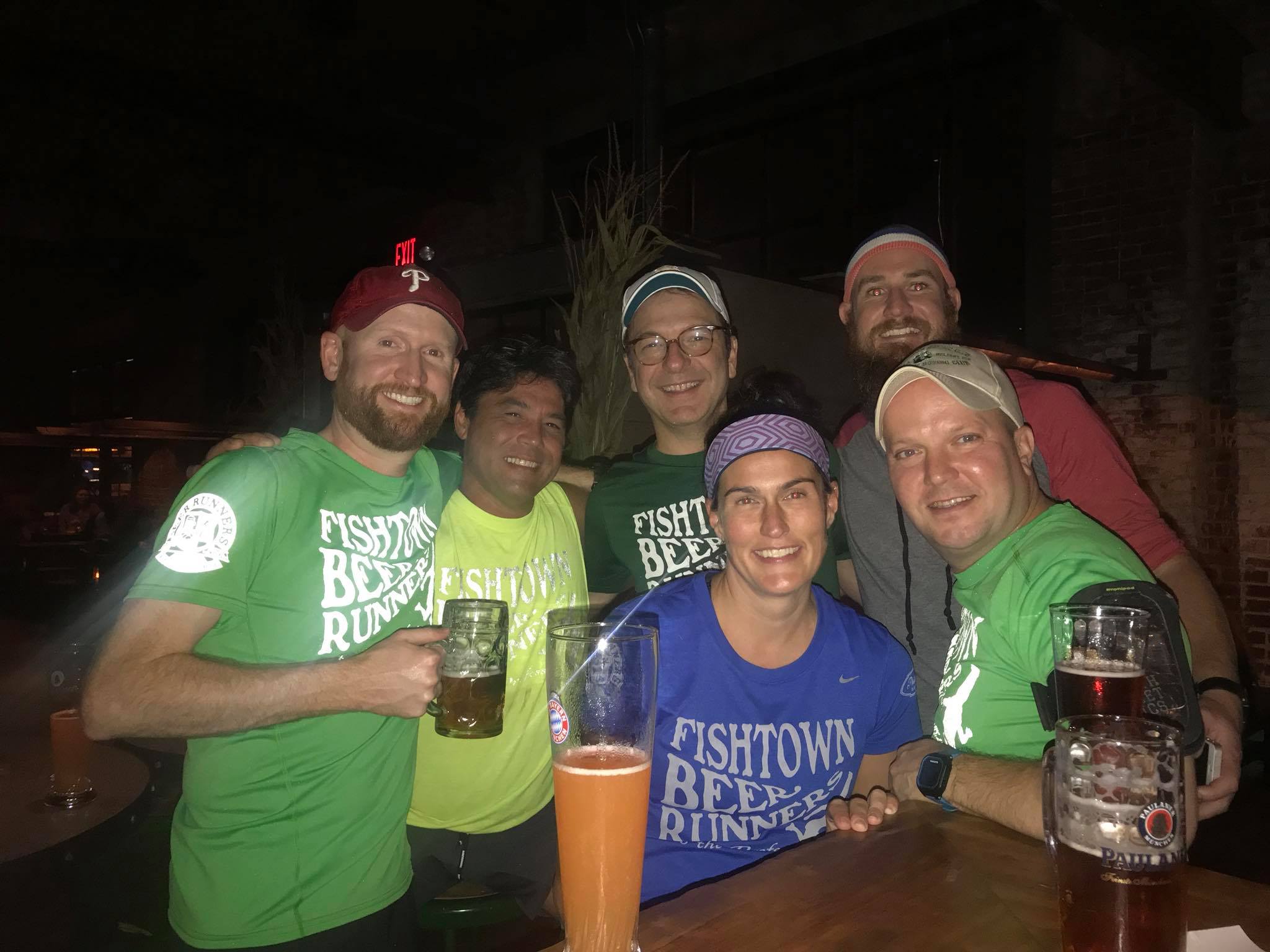 People began showing up on those Thursday evening runs—some out of pure curiosity. “Ten years ago, no one was running and drinking beer. We were a novelty," says April.

Others couldn't run a mile when they joined, but that didn't matter. Everyone runs together for a few blocks before breaking into pace groups.

"People may feel they aren't fast enough to run with a club," says 31-year-old member Jenna Richter. "At FBR, we don't care about your pace, we're just happy you showed up."

And joining is easy. "There are no membership dues," says 38-year-old member Keith Tomaselli who joined in 2011. "If you come once, you're a member for life." 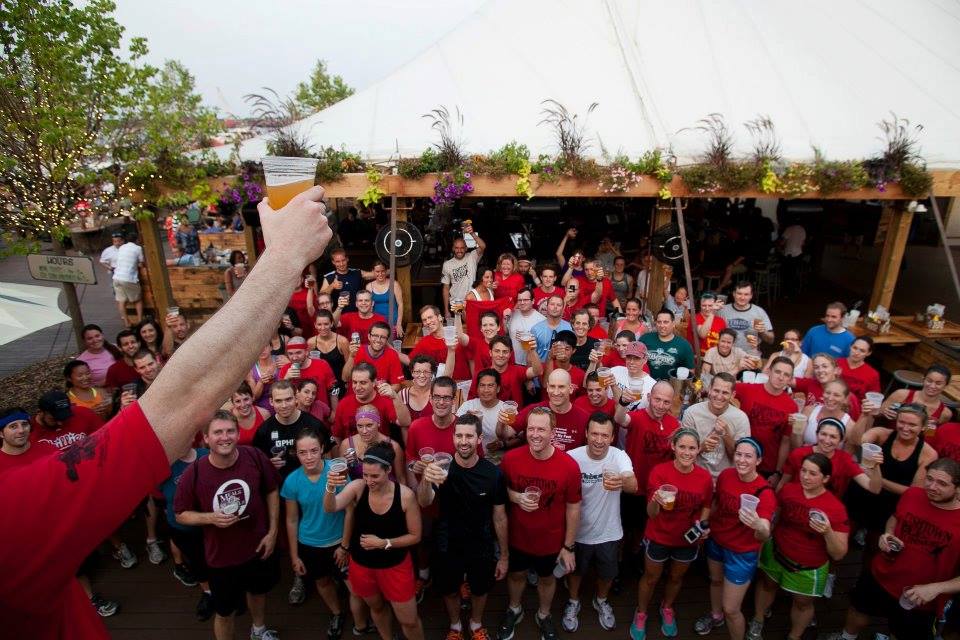 Once runners reach the bar, April climbs on a chair, holds up his glass, and shouts, "To the Professor," in a nod crediting Castillo for his study. Glasses clink and runners erupt in cheers.

The toast is crucial, “People wait around for the toast and it gets them talking. It's what makes Beer Runners different," says Tomaselli.

December 2017 marked the club's 10-year anniversary, and members toasted to the professor at a Beer Runners Gala, donning formal wear with running shoes, of course.

More Than a Running Club

As the club's grown, April recognized that beer was the hook that brought people in, but it wasn't the purpose.

"It was my desire to make sure we were legit," he says. The club is "not about the beer; it's about the transformative power of running."

And transform lives it does: “I've had people tell me that this has brought them new life. I've seen people fall in love," says April.

For Tomaselli, the friendships have taken him places he'd never have gone.

“We ran across the state of Rhode Island. We went to Spain to meet the Professor. We flew to New Zealand with a beer runner for their honeymoon and did a 50K," he says. "Now we're talking about running across the country." 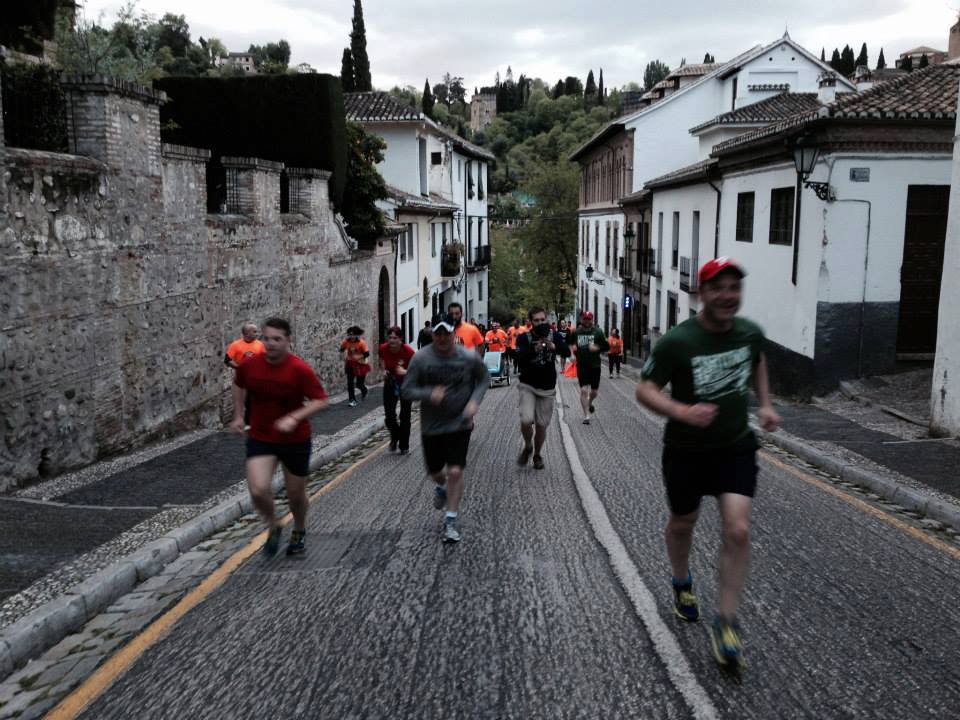 Tomaselli's beer running love is so strong he made it permanent, tattooing the shoeprints from the club's t-shirts on the back of his calves.

For others, it's about health. Member Drew Hess credits FBR with helping him drop 60 pounds.

"I'm off the meds for cholesterol and high blood pressure," he says. "I'm now always in training, and this group's been a big part of it."

Hess is always the first beer runner to sign up for races, and he sticks to a strict schedule, “Every year, I do three halfs, one full, two 10-milers, and some 5Ks sprinkled in," he says.

Even April credits the club with playing a key role in some of his life's biggest moments: meeting his wife and, and three years later, battling and beating, cancer.

"The zenith of my beer running career is meeting my wife," he says. "She may tell you differently, but I'd tell you it was love at first sight."

He and Carmen met while April was in Spain in fall of 2012. After dating long distance, they married in Madrid two years later, and she and her two children relocated to Fishtown.

Just one year after that, in 2015, April was diagnosed with stage three kidney cancer while training for the NYC Marathon. He relied on his family, friends, and fellow beer runners for support while undergoing treatment.

“My surgery was on a Thursday, and some of the beer runners ran to my hospital room after the beer run," says April.

“When we got home, we had the immediate support of the beer runners," he continues. "We didn't cook a meal for two weeks; they provided them."

He slowly returned to running and is now a kidney cancer survivor.

These days, at least one monthly run is now a fundraiser, often for organizations fighting cancer or supporting patients and their families. Sometimes April's tactic for getting donations is asking beer runners NOT to drink.

"Take the money you'd spend on that second or third beer and give it to charity," April says. "It's small money, but it adds up. We can raise $1000 in a night."

While admittedly not the first guy to run then drink a beer, April helped launch what is now a growing beer running movement (races that combine running with drinking at the finish line are popping up around the country, according to several media reports). 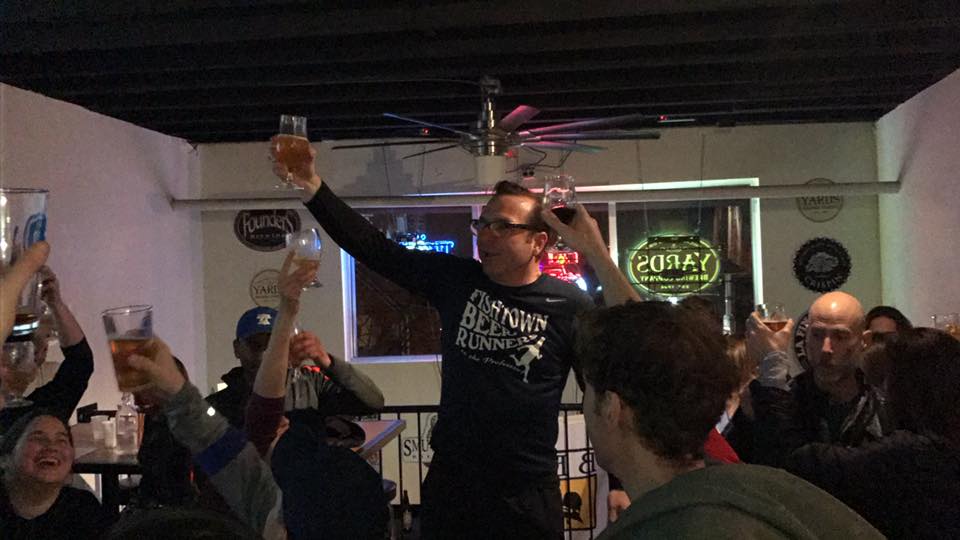 After a trip to Spain in 2011 to meet the professor and speak about the club at the University of Granada School of Medicine, April suggested the country launch its own Beer Runners Club. The Spanish Brewers Association rose to the challenge, creating a Beer Running program that's now grown to 70 chapters and a marketing campaign on beer's role in a healthy lifestyle.

And the movement keeps spreading. Beer Runner chapters are popping up across the country in Las Vegas, Charleston, South Carolina and Gettysburg, Pennsylvania. The newest chapter recently launched in China. Though April never set out to franchise the club, he's proud of the community of beer runners its built around the globe.

Running helped April through one of the worst times in his life, and after 10 years and more than 500 weekly beer runs, he still loves seeing the sport and club make a difference in the lives of others. He continues to host the weekly runs in Philadelphia, raising his pint at the end of each with a simple toast, "To the Professor!"