Seeing the snows of Kilimanjaro is a dream line-item on many an adventurer's bucket list. While estimates vary—and current figures are difficult to come by—roughly 35,000 people attempt to climb the 19,341-foot peak every year with differing chances of success. So what does it take to race a marathon to the top of Africa? Four international runners and 11 Tanzanian locals found out at the first Kilimanjaro Trail Marathon on Aug. 13, 2018, tackling in 10 to 16 hours a climb that takes most hikers a week to complete.

“It's already an epic accomplishment to climb Mount Kilimanjaro," said Erik Rasmussen, 42, founder and race director. “People are like, 'You do it all in a day? How is that possible?' It's hard enough just to do it. Period. It blows some people's minds. But it really is possible." 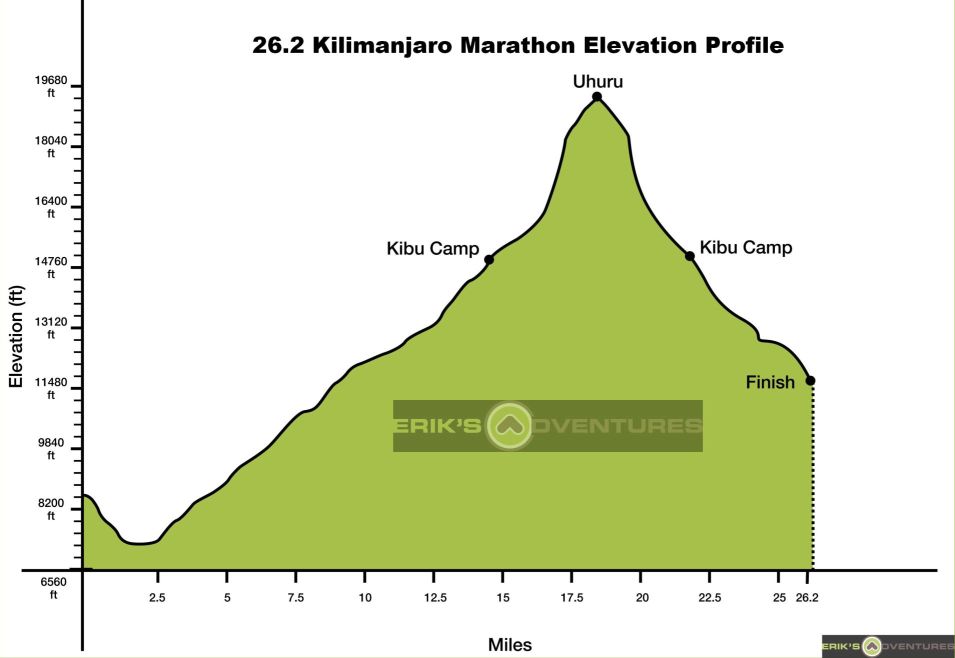 Africa's highest peak, Mount Kilimanjaro is also the world's tallest freestanding mountain, rising solo from the surrounding savanna near Moshi, Tanzania. Now it is also home to what might be the toughest—or at least steepest— marathon in the world. The mountain is unique among the world's highest peaks because it doesn't require any technical climbing or mountaineering skills, making it perfect for an extreme trail race. A small class of solo climbers have sped up the mountain and two other marathons have circled the plains around Moshi. But the Kilimanjaro Trail Marathon is the first to take runners up and down the mountain on a measured 26.2-mile course—from 6,900 feet to the peak at 19,341 feet, then halfway down to 12,300 feet at the finish. 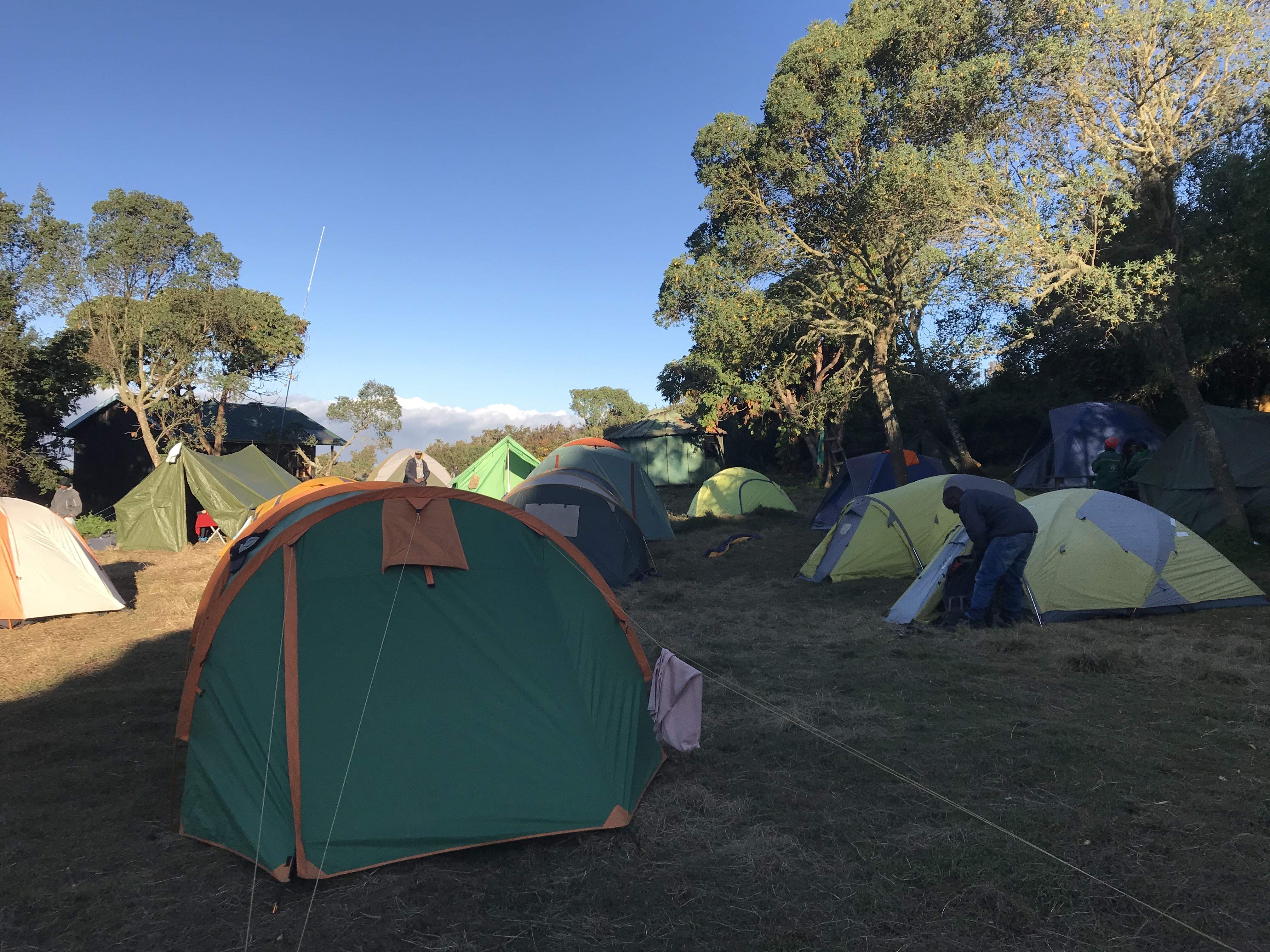 “When you explain to people they are surprised, “It's you? You did this?'" said Yesse Lema, 33, a Tanzanian climbing guide who participated in the race. “When I do the race, I'm feel like somebody different. The race is something really difficult. Not a lot of people can do it. It really is a great adventure."

The marathon is the brainchild of Rasmussen, an American who's been leading tours on Kilimanjaro since 2010. He started measuring the course in 2016, did a solo test run in 2017, and obtained permits for the race that year as well from the Tanzanian government, which controls all activity inside Kilimanjaro National Park. His company, Erik's Adventures, also organizes a 26.2-mile Inca Trail Marathon to Machu Picchu in Peru. Alongside the Everest Marathon and Pike's Peak Marathon in Colorado, the Inca Trail race routinely tops lists of the toughest 26.2-milers on the planet. But none demand such a steep, relentless climb at such a breathtaking elevation. 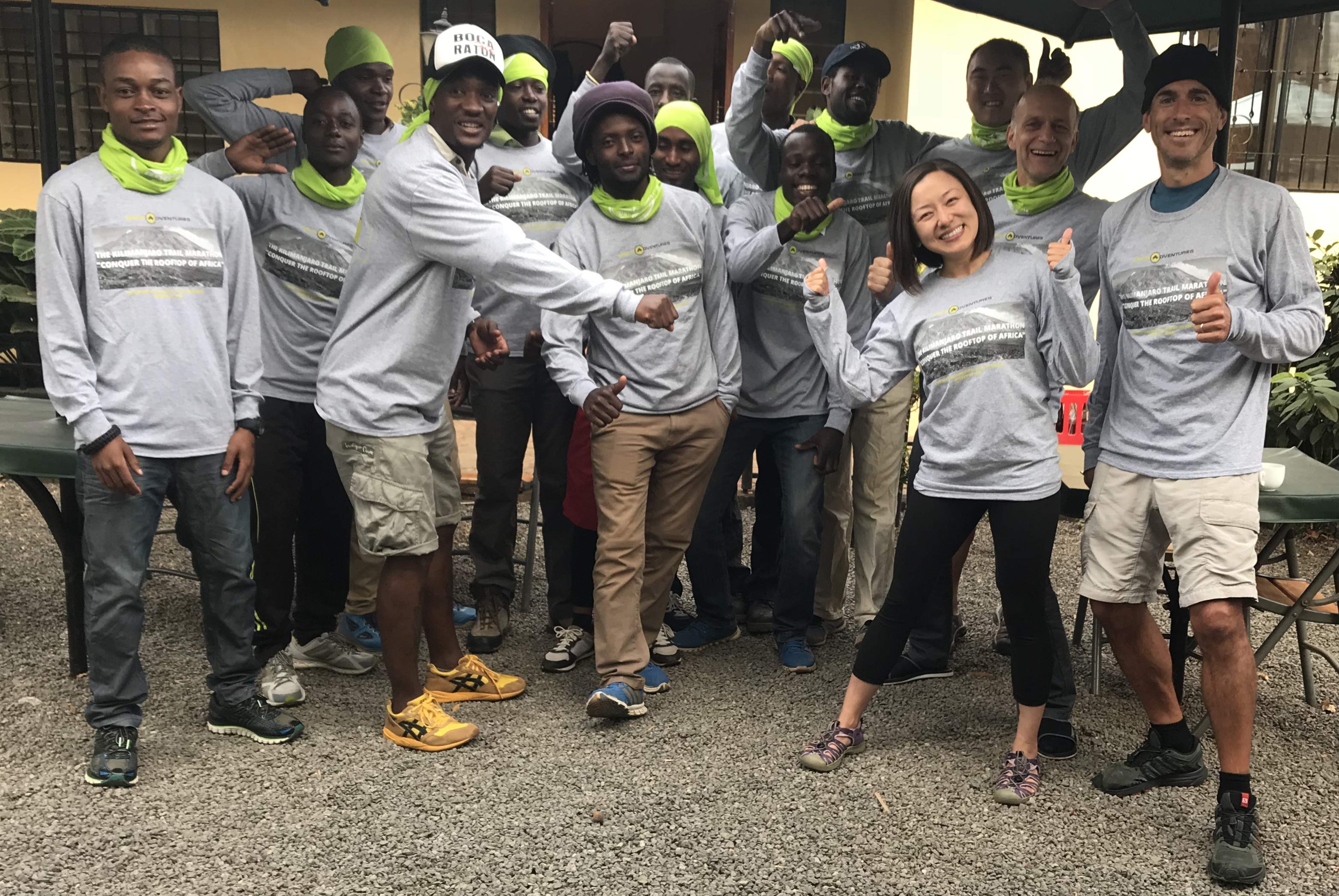 “It's a continuous uphill. There's no place where you get a mile or two break," Rasmussen said. “Then it just kind of gets gradually steeper. The summit portions are the steepest."

After an initial descent from the start, the climb to the peak covers about 16 miles and 12,400 feet of elevation gain—roughly a 14.7 percent incline—with the remainder running directly downhill to a lower camp. Runners can choose between 30-kilometer, 42.2K (marathon), and 50K options. 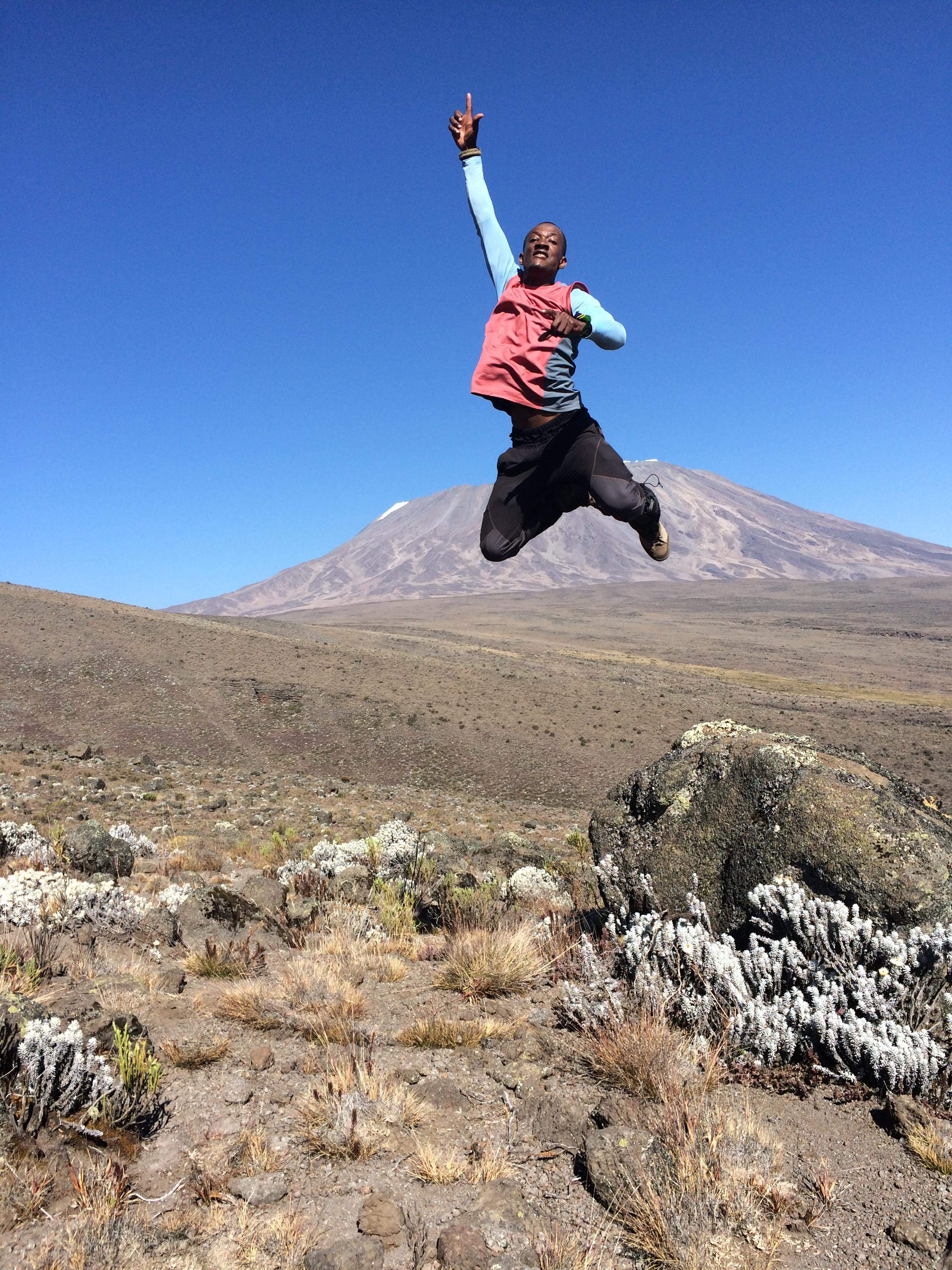 The level of difficulty is hard to fathom. I summited Kilimanjaro in 2009 after an arduous 5-day trek, which proved to be one of the toughest and most awe-inspiring adventures in my life. When I reached the peak at dawn—breathless and nauseated from altitude sickness—I burst into tears, hugging my climbing partner and our guides. I'd already finished two marathons, but hiking Kili was a challenge like nothing I'd experienced before or, frankly, have since.

“The mountain itself seems to leave an impression on people," Rasmussen said, noting client comments and seeing Facebook profile photos at the summit months and even years later. “How they feel about their experience is very deep." One man I met was so moved by the mountain that he named his dog, Kili. "Too magnificent for words" was the descriptor I chose in my own hiking journal.

Traveling roughly 30 to 45 miles, depending on which of the seven routes they take, climbers journey through five climate zones, from farmland to rainforest, moorland, alpine desert and finally arctic glacier. Temperatures can range from 90 degrees Fahrenheit at the base to -20 at the peak. 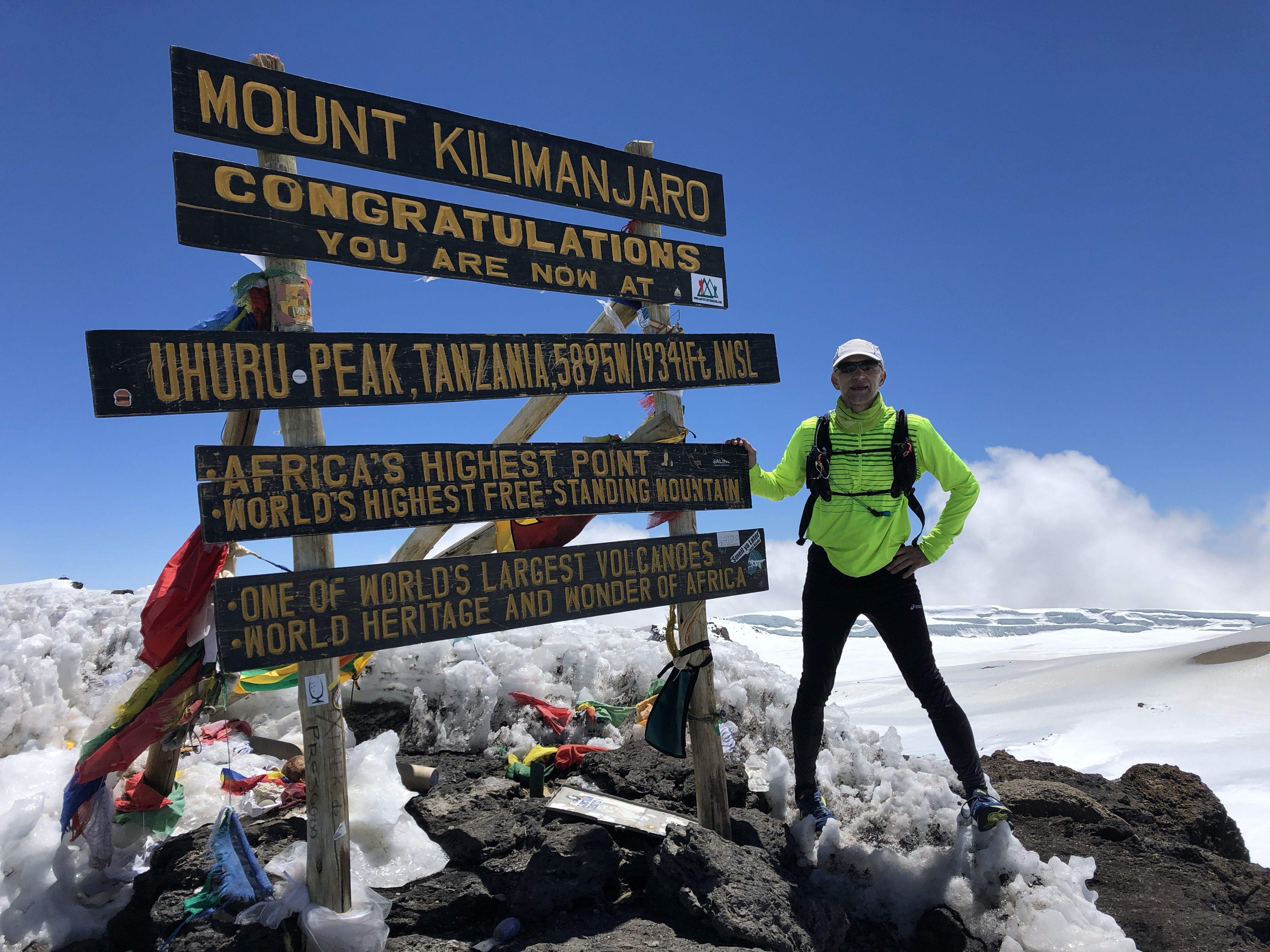 “At the bottom you are seeing monkeys and then you are walking on ice, and you don't need to be an expert ice climber to do it," Rasmussen said. “You are going up 5,000 feet higher than the Rockies. So I think it's a huge accomplishment." 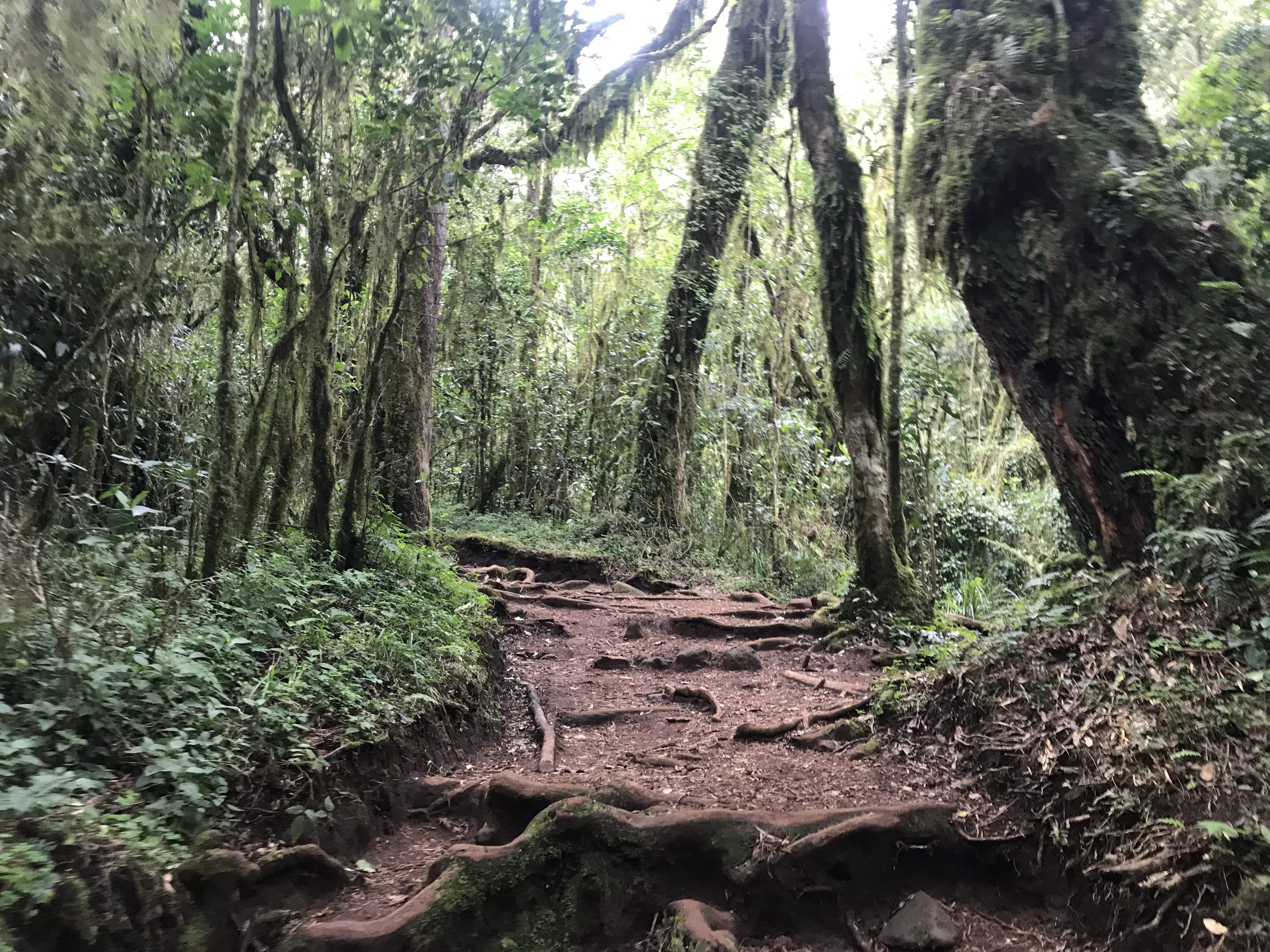 For Lu Li, 31, from the U.S., the Kilimanjaro Trail Marathon was a challenge she didn't finish, but enticing enough that she wants to try again.

“The race itself was awesome," she said in a post-race video. “I didn't end up finishing it, so that gave me another reason to come back."

Indeed, as few as 61 percent of climbers make it to the peak on standard 4-5 day routes and more than 75 percent get acute mountain sickness, according to a 2009 study published in the journal Wilderness & Environmental Medicine. Hikers who spend more time on the mountain fare better, with 88 percent successfully summiting and just over half getting altitude sickness on 6-day routes, according to a 2016 study in the same journal.

Even under the best conditions, the climb takes a toll on the human body. Acute mountain sickness is a risk at any altitude above 8,000 feet. Above 18,000 feet, considered extreme altitude, lung capacity drops below 50 percent and brain function slows dramatically. 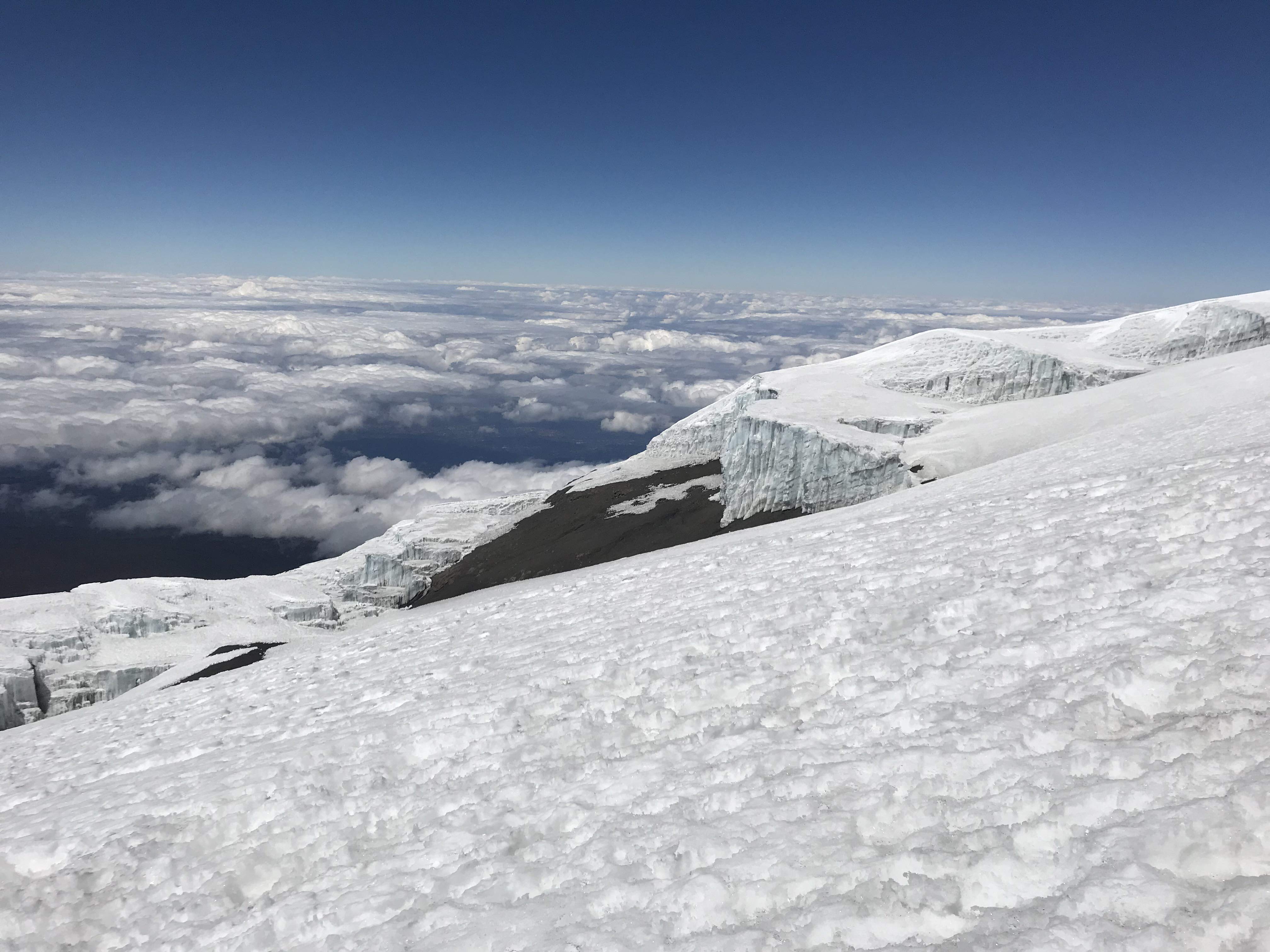 On my way up Kili, I met four climbers who failed to summit, largely due to altitude sickness. I saw a fifth being carried down the mountain on a stretcher—a sobering moment. Once we pushed past 15,500 feet, I struggled despite the fact that I spent an extra day on the mountain acclimating and took medication to combat altitude sickness. My head throbbed, my stomach churned, and I fought to breathe. I felt like vomiting nearly every step.

Rasmussen strongly encourages participants to train at altitude in the weeks before the race—whether it's time in the Rockies or climbing Kilimanjaro the more traditional way. “Fitness is one thing. But the biggest thing that will turn them around is the elevation," Rasmussen said. “The best way to acclimate for Kilimanjaro is to do Kilimanjaro a week before on a whole different route so you also get a chance to appreciate it."

Ulrich Schlegl, 51, of Germany, who finished the inaugural marathon, agreed. “Overall, the problem is really to get properly acclimated for this race," Schlegl said in a post-race video. “It's really worth to do it. The organizing is perfect. The porter, all of the cook, and all of the guides, they were so helpful." 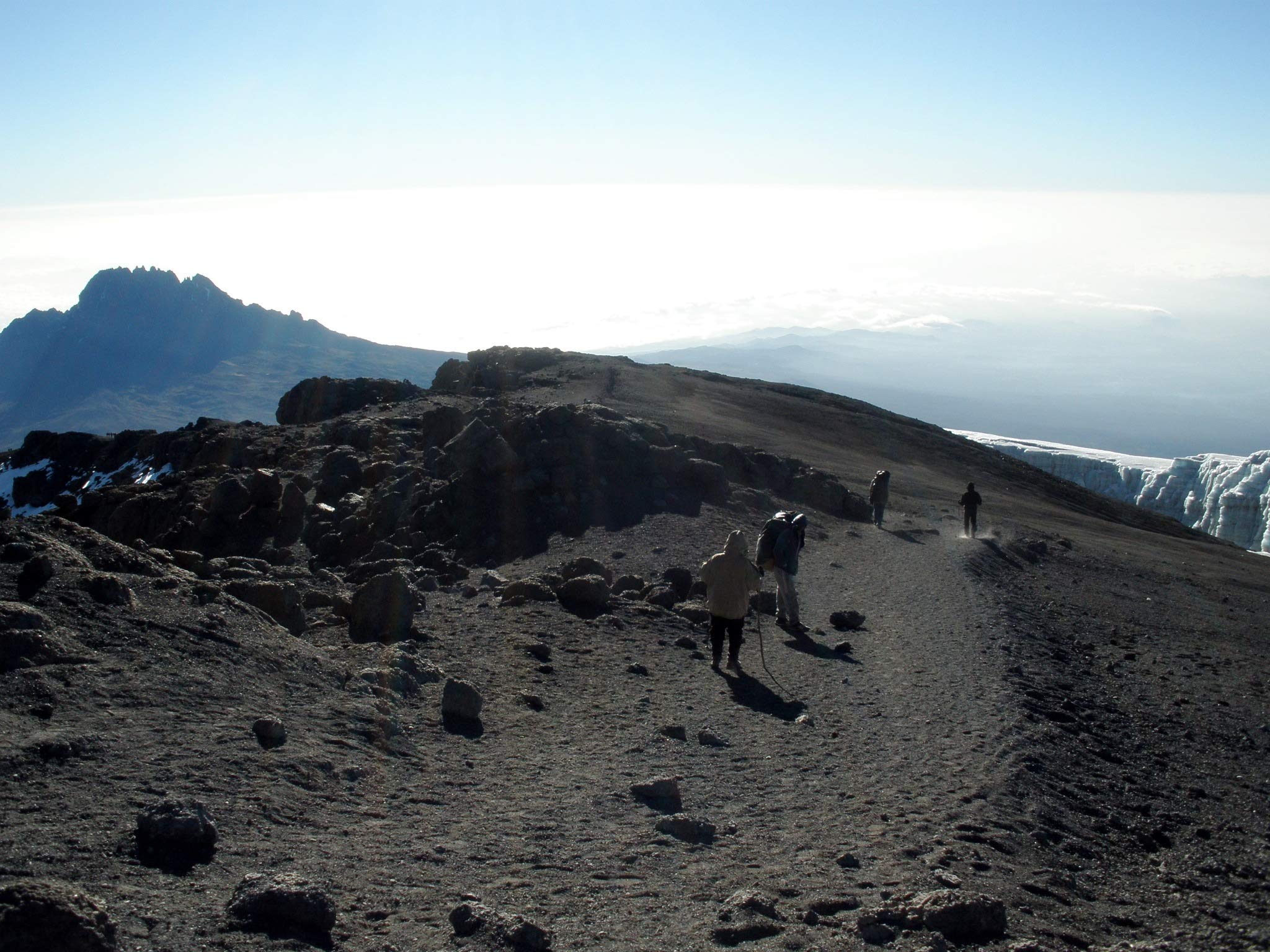 So helpful that Lema cut his own race short when he found one of the runners struggling. Lema had guided the hiker to the summit a week earlier as part of an acclimatization trek that Rasmussen offers.

“Yesse was trying to encourage him and when he said, 'I can't. That's all I got,' then he turned around and went down and stayed with him until the finish line," Rasmussen said. “They finished together."

Lema took it in stride. “When you become a guide, you go for the customer care. When I met someone struggling I look after them and take care of them, because I'm the guide. I stayed with them to motivate them," he said. “We need to be happy and healthy. When you see somebody struggling, my happiness to reach the top or win the race would be bad."

On the expedited racing schedule, the logistics are daunting. The marathon runs up the volcano on one route and down another. Participants pack three separate bags for the start (where they camp the night before the race), base camp at 15,430 feet near mile 15 (where they access crampons, gloves, and other snow gear for the push to the summit), and the finish line (where they have dinner and camp post-race). Regulations require trekkers to use licensed guides, official routes, and ban wood fires, necessitating crews of porters and cooks to shuttle gas, food and gear up the mountain. 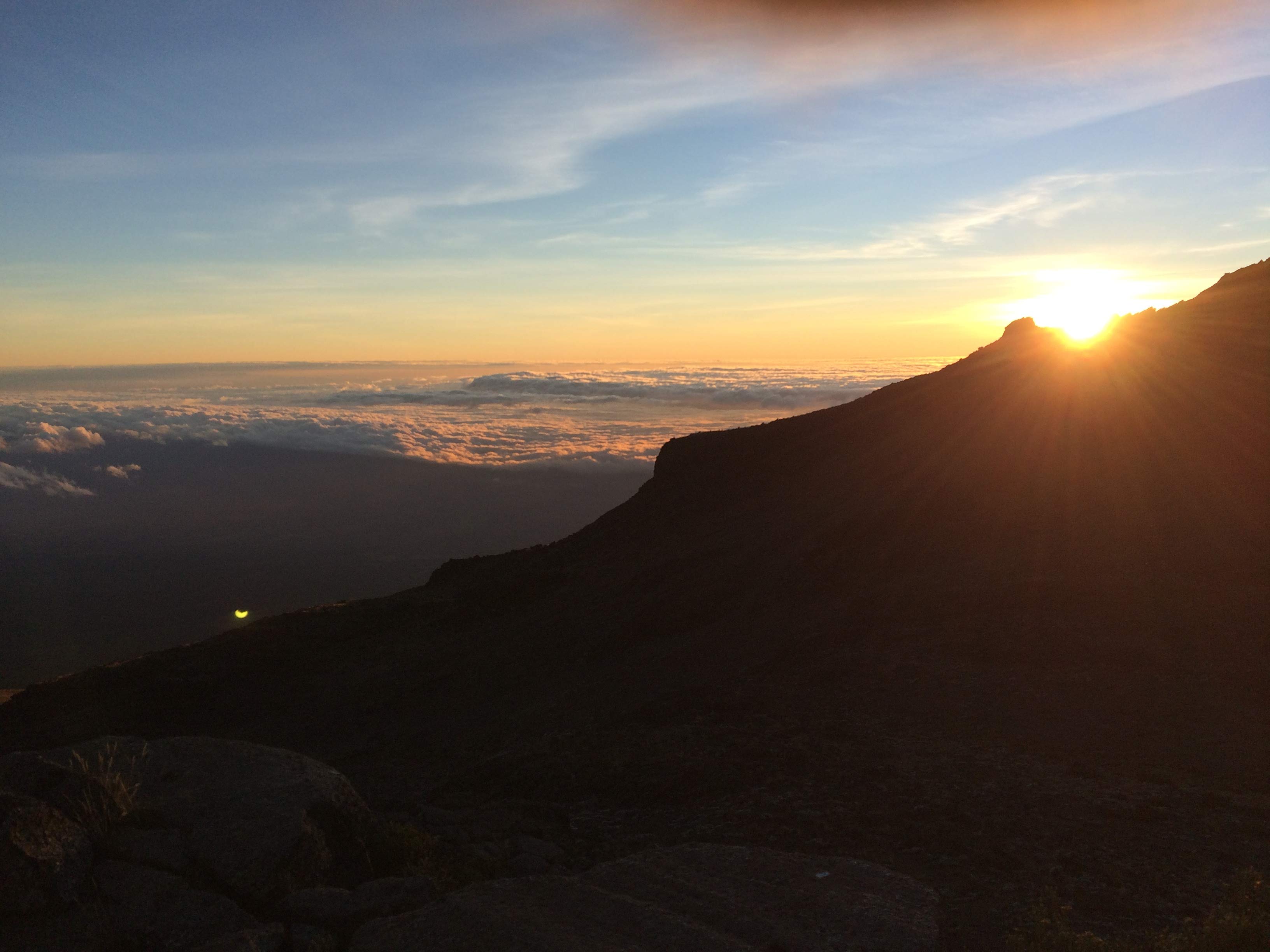 At the inaugural race, 45 staffers transported supplies and manned the start and finish camps plus four aid stations—all for just 15 racers. These crew members, like Maisha Francis, 38, who has worked as a head guide for three years, moved up, across and down the mountain multiple times at two to three times the usual speed, Rasmussen said. Effectively, they ran their own race.

“Running is something extra, something different," Francis said. "It makes us famous. Not everyone is able to it."

But Rasmussen didn't want to limit locals to support staff roles. Inspired by the book Born to Run, he sponsored a competition among Tanzanian porters, cooks, and guides who work the mountain year-round. He paid all the expenses—including park entry fees, food, tent rentals, and staffing costs—for 11 locals to run free of charge, and put up $200 in prize money for the top Tanzania finisher. In a country where the gross national income per capita was $910 in 2017 (compared to $58,270 in the U.S.), it was a big incentive.

Lema, who said he has summited Kilimanjaro 320 times in the last nine years, is one of approximately 400 guides, 500 cooks, and 10,000 porters who work on Kilimanjaro each year. Lema and Francis, who live in Moshi and the surrounding villages, said their families weren't thrilled with their participation in the race.

“Some wanted to stop us. 'You're going to lose your life,'" Lema said they told him. 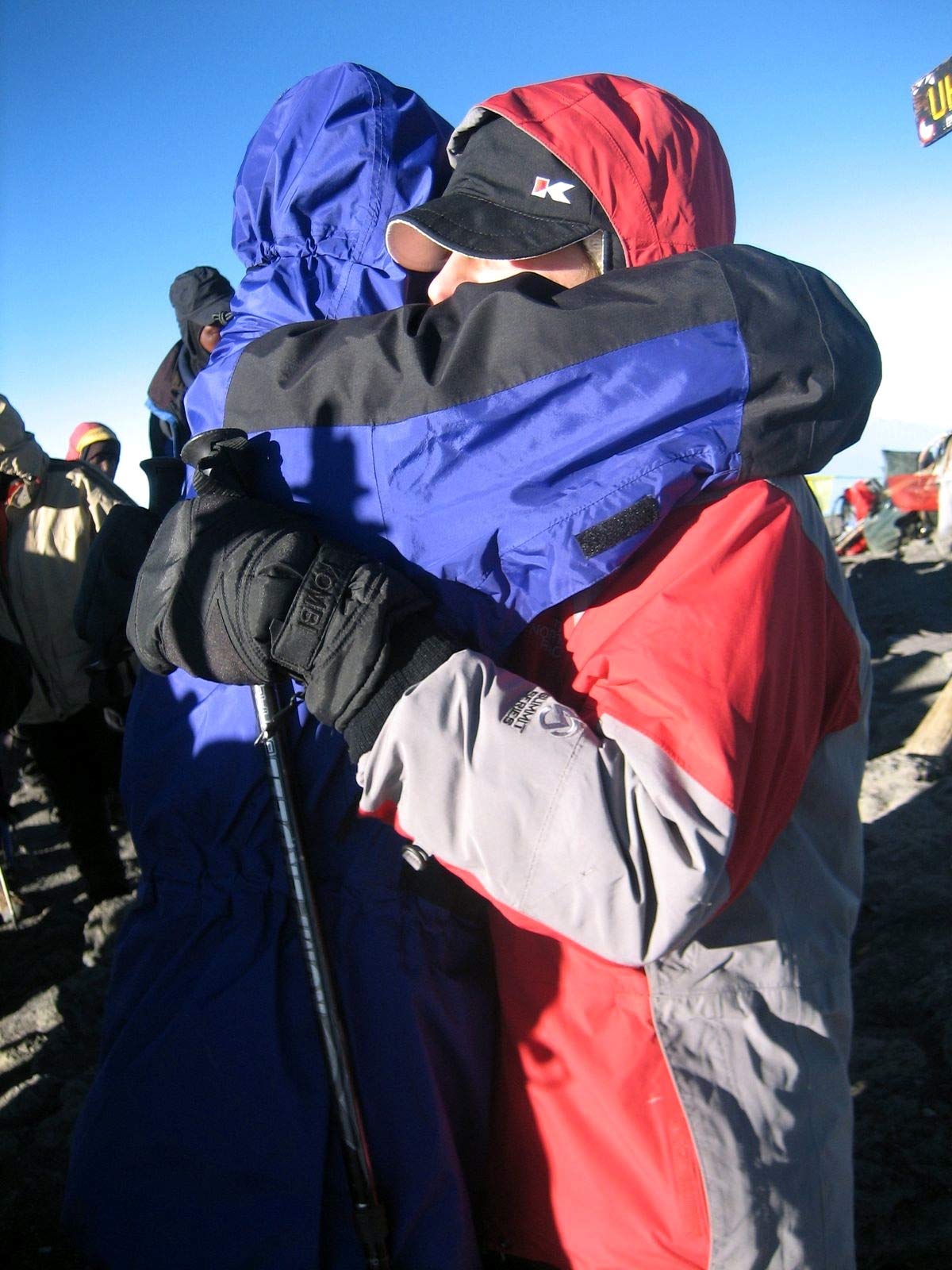 A 2004 study found that an average of three tourists died per year on the mountain. But some local tour operators estimate the climb causes upwards of 10 deaths annually after factoring in the growing number of visitors and workers since then.

“After we finish everyone is happy," Lema added. "People who know about the race ask me a lot of questions. I'm really famous now."

Still, the challenge proved tougher than expected, even for locals. Lema and Francis said the Tanzanians came to a consensus: they need to train more. While they're used to moving quickly up the mountain, they're not accustomed to doing it in one day. He anticipates stronger training for the 2019 race, making the competition more fierce.

For his part, Rasmussen hopes to grow that local competition, sponsoring 15 runners in 2019, and eventually expanding the prize pool for Tanzanians. He likes the idea of bringing local runners and trail seekers from around the world together in competition.

With the 2019 race day set for Aug. 12, Francis hopes more international runners, who pay for the privilege to race, will accept the challenge.

“Every year we want to get a lot of people from abroad to run on the mountain," Francis said. “Come try. Don't be afraid. You are strong."

Lema sees it as a mental challenge more than anything else.

“To be a part of the race is not just to be really strong or to be really fit," he said. “Make your mind strong. Just dream it."

Gifts for Mom's Who Run